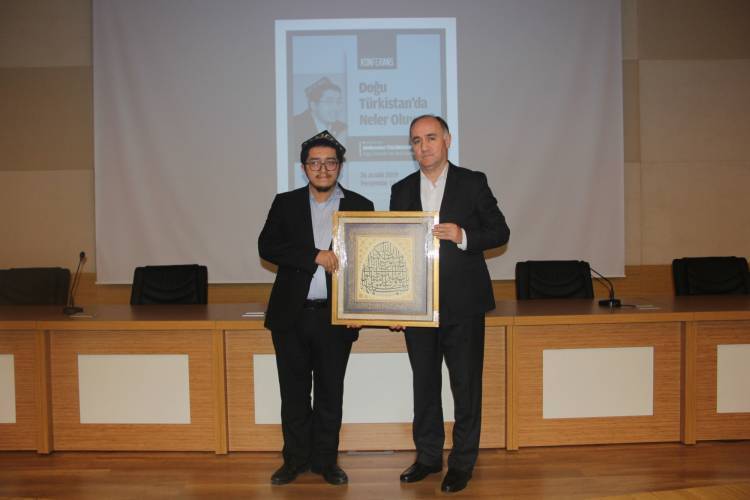 What is Happening in East Turkestan

The President of East Turkestan New Generation Movement, Abdussalam Teklimakan gave a speech on “What is Happening in East Turkestan” with the contribution of Arabic Language Student Clubs.

Teklimakan mentioned the geographical location, culture, architecture, and history of East Turkestan and he emphasized that it is a place for Turks, which is located in the Easternmost and two times bigger than Turkey. Then he continued his speech as follows:

“Although China claims East Turkestan’s population is 11 million, it must be much larger than this as according to the latest population census which was done seventy years ago, its population was around 7 million. So, we think that the actual population is around 30-35 million. East Turkestan is very rich in terms of underground resources such as coal, iron, gold, and gas. This richness is one of the main reasons why China has occupied East Turkestan.”

He also talked about how China oppresses Muslims. He said that taking headscarf, growing a beard, having a Muslim name, using star and crescent signs, having Islamic ceremonies for a funeral are seen as signs of terrorist activities. Those who perform any of these are sentenced by Chinese authorities which monitor the Uyghur Muslim 7/24. According to the UN Human Rights Committee, there are more than 3 million people in Chinese detention camps. Besides, around 500 thousand children were kept in the children’s camps. These camps are like sheltered prisons though China claims they are education camps. In these camps, there has been intensive surveillance, arrestment, tortures, and rapes especially since 2017.

Teklimakan supported all these issues with photo images shared by Chinese authorities and he ended his speech as follows:

“The thing that saddens us most during this process is that Muslims do not include East Turkistan in their prayers whenever they pray for those oppressed nations. I am your brother and I have a right to ask you to pray for us. Please include East Turkestan in your prayers; just two words. What else you could do? If you are an illustrators or cartoonist, draw about us; if you are a writer, write about us; if you are a researcher, research and publish about us.”